I am excited to have

Author Susan Boles as my guest today. Susan is the author of the award-winning Lily Gayle Lambert Mystery Series. And out soon, her book, Death On The Beach is part of a part of the boxed set, Summer Snoops and Cozy Crimes, 12 Mysteries of the Dog Days of Summer. All proceeds from this boxed set will go to support to Non-Kill Animal Shelters.

Who is Susan Boles?

I love writing books! Which is a given under the circumstances! I love reading all genres and also poetry. So, even though I write cozy mysteries, and some romantic suspense, I really enjoy reading a lot of other things too. My day job is in the investment and insurance industry and I monitor regulatory changes at the state and federal level. Pretty dry and boring. But it’s always changing so there’s job security in that! LOL. Until I moved to Mississippi six years ago, I was a seventh generation Tennessean. I love genealogy and have worked on my own family history for over twenty years. I love animals and have a rescue mini-dachshund named Lucy and a rescue cat named Zimba.

What was the first thing you ever wrote that made you think perhaps you would like to be a writer?

When I was in junior high school I began writing poetry and short stories. I was crazy about horses and wanted one of my own and all of my short stories were centered around a teenage girl and her adventures while out riding her horse in the country. I knew all the way back then that I wanted to be an author, but it took a very long time before I wrote my first book and even more time before it got published.

What tweaks your creativity?

That’s an interesting question because it’s a lot of things rather than one thing in particular. I might see something on TV that makes me go Hmm. That would make a great story! Or hear a song and have the same reaction. Or a friend may say something that gets my imagination saying What if?

Tell us about your latest book.

I’m currently working on a novella for a box set of cozy mysteries that will be released in late July. My novella is part of my Lily Gayle Lambert series 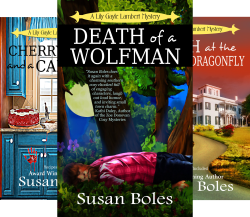 and takes place at the beach. One of my favorite places!! Even on vacation Lily Gayle and Dixie stumble onto a murder victim. I’m also currently at work on a romantic suspense novella for the Brotherhood Protectors Kindle World. It will be a crossover from the Lily Gayle Lambert series with some of those characters appearing in the romantic suspense. That one will be released on June 26th! My plate is pretty full right now.

What is the favorite thing about your main character?

Her insatiable curiosity. I’m a big believer that being curious and learning all throughout life are positive things.

What are your characters most serious flaws?

Her inability to control that endearing curiosity. But if she could, there would be no books, right?

How many series do you have out and how do they differ from one another?

Right now, the Lily Gayle Lambert books are the only series I have out. I am going to be publishing regularly in the Brotherhood Protectors Kindle World, this year so I think that may fall into the category of a series. Or maybe not. But the Brotherhood books are romantic suspense instead of cozy mystery like the Lily Gayle books. I also have ideas for a couple more cozy mystery series that I’d like to work on later this year. So, hopefully, there will be a new series out in 2019.

You are a champion of animal rescue. Can you tell us about the boxed set of books that will be available soon and where the proceeds go and why you chose this particular platform?

I am so honored to have been asked to be a part of this box set. I am a huge advocate of animal rescue. There are so many animals out there that need loving homes. I am active with a local rescue group in Memphis, TN and see how very hard the members of the group work to take care of these animals and to make sure that go to loving homes. This box set, Summer Snoops and Cozy Crimes,  includes twelve authors of cozy mystery. Some of the books, like mine, are part of an existing series and some are something new the authors wanted to try out in the set. Revenue will go to two no-kill shelters we chose. AniCira is one. It’s a group in Virginia. www.anicira.com The other is Jefferson SPCA. Which is in Jefferson Parish, Louisiana. http://www.jeffersonspca.org Both of these groups are very committed to finding forever homes for lost and/or abandoned animals. It’s available for pre-order already on all the big e-book retailer sites.

What makes you smile?

Lucy and Zimba. Sunshine on water. Flowers growing in my garden. The smell of the earth after a heavy rain. A cup of hot tea and a good book on a rainy afternoon. A rocking chair or swing on a big front porch.

Seeing an animal or a child being mistreated. Those really get me.

Oh my, yes! I am my own worst critic and I sometimes think every word I’ve written is crap. And I have to restrain myself from just deleting everything. My friends are the best. When I get discouraged they talk me off the ledge. I walk away and come back with a calmer frame of mind and take a hard look. Sometimes big sections do need to be deleted. But never all of it.

What advice would you give to new authors or those dreaming of becoming an author?

I like to end my interviews with an author’s favorite quote. What is yours?

Life is like a box of chocolates. You never know what you’re gonna get. ~ Forest Gump

My Review of  Susan’s book Death at the Midnight Dragonfly:

This is the first I have read of Susan Boles LIly Gayle Lambert series but it won’t be my last. A sleepy Mississippi town, quirky characters, a dead on the doorstep body, two best friends sleuthing where they shouldn’t be and an old possible heartthrob coming back to town have the mysteries details leading the reader down an intriguing road. And it all happens during the Christmas season.   What could be better than a holly jolly redly deadly Christmas? Lily Gayle, the main character, wasn’t in the Christmas mood anyway so a few threats on her and her best friend Dixie’s life just might perk up her mood.

This was a well-written, enjoyable book that kept me reading and kept me interested from beginning to end.

Susan is the award-winning author of the Lily Gayle Lambert Mystery Series and a contributing author to the Brotherhood Protectors Kindleworld.

A lifelong long love of all things mysterious led Susan to write cozy mysteries. Nancy Drew and Trixie Belden were the first to show her that girls can be crime solvers. Agatha Christie showed her that even small towns have big secrets. And Phryne Fisher showed her lady detectives can be outrageously individual. She lives in Mississippi with her rescue mini dachshund, Lucy, and her rescue cat of no particular breed, Zimba.

She currently writes the Lily Gayle Lambert mystery series set in the fictional town of Mercy, Mississippi featuring a multi-generational cast of female sleuths and romantic suspense in the Brotherhood Protectors Kindle World.

Stay in touch for upcoming releases!

Susan writes mysteries and set in the big city of Memphis, TN and the fictional small town of Mercy, Mississippi.

I am a rambler. That means I am a talker and I flip from one subject to another. Occasionally I write that way too. I can’t make my blog about any one subject, there are too many things to say. I am an author of the Fuchsia, Minnesota and Brilliant Minnesota Cozy Mystery Series with Cozy Cat Press. The first book in the series, Granny Hooks a Crook, is available now Kindle price always .99. Along with that, I write a column called Something About Nothing. Again, I do, what I do best, write about nothing. I also feel that as a Grandmother, yes I am old, I want my grandkids to know who Grandma used to be so I also created the Granny Is In Trouble Series. My books in the series “Whatchamacallit? Thingamajig? and Snicklefritz is available on Amazon and Barnes and Noble. Life is great, it needs to be lived. There is a child we keep hidden in all of us in our adult life. We need to let the child out once in awhile. We can learn so much from children. Watch their awe when they first discover the world. If we can recapture that, we can recapture the wonder of life.