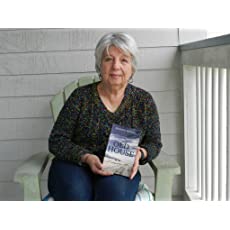 Sharon Mierke’s new book in her Beryl Swallows Mystery Series couldn’t come at a better time. With all of us being at home we need something to read that offers us a great mystery along with a breath of fresh air in this topsy turvy world. Dead End does this well.

I am a fan of Sharon Mierke’s main characters in her Beryl Swallows Series and her Mable Wickles Series. She creates perfect characters that you come to feel comfortable with, trust, and make you a part of their family.

In Dead End Beryl Swallows comes back to help her friend Sam Gallaway who is in jail and accused of murder. Even though her financial circumstances have taken an upswing and she has moved, she hasn’t forgotten her roots. Accompanying her on the trip is Eachen, a bigger than average dog she inherited from her mother. As she revisits old neighborhoods and old friends the pieces began to come together. I won’t tell you anymore except you won’t be disappointed when you read this book. It is a comfortable read with a good mystery. I can’t quite describe the feeling but it was as if Beryl is an old friend. I give it five stars . This is the third book in the series. I highly recommend reading the rest of this series and also the Mable Wickles Series. Sharon has a historical series as well. I am not a historical reader so I haven’t read them but those who love that genre have high reviews for that series too. Take the time to read Dead End. It might change your mind of the meaning.

When Beryl Swallows, ex-cop and now private investigator, receives a phone call at three a.m. from her friend, Sam Gallaway, telling her he needs her help, she responds immediately. There is no way Sam is guilty of murdering his ex-wife, but she has to prove it and all the evidence points to Sam. Not only that, because every suspect has an alibi, but the investigation also hits a dead end. Will Sam be spending the rest of his life in prison for a crime he did not commit?

“I’m not sure when someone decides to become a writer. I was once asked why I started and I said, ‘I was tired of reading so decided to start writing!’ Some dream about it but never do it and others are foolish enough to try. I have always loved Daphne DuMaurier’s quote: ‘Writers should be read and not seen or heard.’ I loved the thought of writing but having anonymity at the same time. I doubt that can be achieved in today’s world. I write to be true to myself. I share it because I hope others will find joy in reading it.”

As most writers, Sharon started writing short stories. After having several published and finding it hard to squeeze a story into only a few hundred words, she decided to follow her dream and write novels.

Her book, VIRTUAL ENEMIES, is a mystery and introduces readers to Beryl Swallows, a retired police officer and now a private investigator. In this story, she is hired to solve a murder – by the victim herself. A mystery within a mystery. This is the first in the Beryl Swallows Mysteries. In the second, CASE CLOSED.not, Beryl finds one of her mother’s old diaries and it takes her back into a past she never knew existed. Was her own mother a murderer? In DEAD END, Beryl must find a killer before her friend, Sam Gallaway, spends the rest of his life in prison; however, every search ends up in a dead end.

Sharon has six current books in the Mabel Wickles mystery series: DECEPTION BY DESIGN, CALAMITY BY THE CAR WASH, COLD CASE CONUNDRUM, FROZEN IDENTITY, MABEL, MURDER & MUFFINS and MEMORIES, MURDER, & MABEL. Mabel is good at finding trouble; however, along with her friend, Flori, and other Parson’s Cove citizens, she always seems to find the way out. And find the guilty party! MEMORIES, MURDER & MABEL is the last in the Mabel Wickles cozy mystery series. Mabel is retiring!

Besides writing mysteries, Sharon writes historical fiction. Her first historical fiction, SARAH’S VALLEY, carries us on a journey from the east coast of the United States, through the Midwest, and up into Canada. The sequel, RETURN TO SARAH’S VALLEY, continues the story. Now it is Patrick’s turn to tell his life story to one of Winnipesaukee’s descendants.
Her second historical fiction, THE WIDOW’S WALK, centers around life in the early 1800s on the Texas Panhandle and down to the island of Galveston. A family struggles to survive as the Civil War rages and the young son leaves home to search for his step father.
A poem written by the author’s mother, Ellen Bunse, in 1929, was the inspiration for Sharon’s latest book, OLD HOUSE. The house was built in the 1860s and through the next hundred years, you will read of all the people who found shelter within its walls, from a Texas cowboy with a bounty on his head, an old prospector, and a woman seeking refuge.

Sharon Mierke and her husband live in Manitoba, Canada, where the summers are hot and the winters, cold. Their second home is Galveston, Texas, where they have established many friendships over the past twenty-some years. They have four grown children and four grandchildren. Sharon’s hobbies include reading, scrapbooking, and photography.

The Editing Pen – For All Your Editing Needs

Is he guilty? #crash #guiltycatsoftiktok #ilovemycatsomuch #cozyathome #mysteryauthor #catsoftiktok #catlover #mischeifmaker
Boris and Natasha have their own TikTok account @theshysters
Follow at @theshysters on TikTok #catsofinstagram #cat #catlover #author
Learn sbout my fictional community that is a satire on our communities today! #minnesota #cozyreading #kindle #kindleunlimited #satire #communities #booktok #bookstagram
Let’s embarrass my grandkids.
Our characters in our books grow with each new book. It makes us care. Find me at julieseedorf.com #booktok #books #authorpromo #minnesota #cozyseries #kindleunlimited #amazon

I have a soft heart. It may not seem that this brash, loud person is vulnerable. A friend whom I love, who is occasionally abrasive, but a tell -it-like -it-is person, keeps a part of herself hidden. She and I are alike in that we seem to be extroverts, but I found I’m really an […]

I can’t imagine a life without prayer. It may appear to others that I have let my prayer life lapse. I haven’t been to an actual church service in the last few years, partly because of Covid, and partly because of laziness and disillusion with the structure, meaning the business side of churches today. Yet, […]

Hear The Whispers Of The Elderly

What’s on my mind? A catch-22. Most seniors at some point in their life are going to have to move into a care facility. Care facilities are expensive. It costs a lot to run them and retain good staff. The life of nurses and nursing assistants are hard and grueling. Long hours, low pay, always […]

A Beth and Evie Mystery Book 1 Winter Solstice, 1968. While most of the world is transfixed by the televised images of the first manned lunar orbit, Beth Williams rushes through the eerie quiet of her home-town city park trying to get to work on time. Suddenly, a body rolls down the hill and lands near […]

Bad Vibes-A Sara Baron Tuned-In Mystery Oboist Sara Baron is settling nicely into her new life back in her hometown, but when a friend goes missing under suspicious circumstances, her newfound equilibrium is thrown off balance. The police don’t suspect foul play, but Sara gets a bad vibe when she finds her friend Micah blew […]

Where Wild Peaches Grow by Cade Bentley Release Date August 30, 2022 In a deeply emotional novel of family, cultural heritage, and forgiveness, estranged sisters wrestle with the choices they’ve made and confront circumstances beyond their control. Nona “Peaches” Davenport, abandoned by the man she loved and betrayed by family, left her Natchez, Mississippi, home […]

Originally posted on Author Julie Seedorf:
It’s finally here. Tuesday, March 1 is release day for Weed Lake and it also starts my Blog Tour with Lori Caswell and Great Escapes Virtual Book Tours. Weed Lake is a crossover with Granny and Jezabelle from the Fuchsia, MN Series and the Brilliant, MN Series. If you’ve…